Changes in the course of military operations in 1941-1945 forced the German government to radical changes in its attitude to the anti-Bolshevik and national-liberation struggle of the nations in the USSR. These changes were conditioned, first of all, by the attempt to protect themselves from a complete military defeat and preserve the Nazi regime. Alfred Rosenberg, the Head of the Reich Ministry for the occupied eastern territories, took the initiative to create anti-Bolshevik national committees of sub-soviet nations who sought independence at the last stage of World War II in Europe 1944.

There were already formed Ukrainian, Azerbaijani, Belarusian, Georgian, Armenian, Crimea-Tatar and other national committees in February-March 1945. Practically, this meant that Germany was forced to recognize the aspirations of these peoples to form their own states. The government of the SC UNR was quite skeptical about such cooperation with Germany at this stage, considering the formation of the Ukrainian National Army primarily as an opportunity to preserve Ukrainian soldiers and sergeant majors. This was done with the withdrawal of troops to the American and British occupation zones. Despite the necessity to form the UNC and the UNA, this process was also important for countering Russian non-Bolshevik forces that were trying to take control over the Ukrainian organized movement to create a “united and inseparable” Russian state. A. Livitsky, the President of the UNR, began the process of resuming the activity of the UNR emigration government and consultations to reorganize its structure after moving to the American occupation zone of Germany. 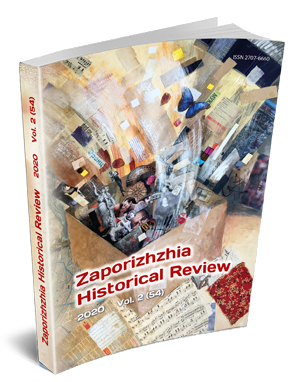 Published
2020-12-27
How to Cite
Yablonskyi, V. (2020). THE STATE CENTER OF THE UNR (THE UKRAINIAN NATIONAL REPUBLIC) IN THE EXILE AT THE FINAL STAGE OF WORLD WAR II (1944–1945). Zaporizhzhia Historical Review, 2(54). Retrieved from https://istznu.org/index.php/journal/article/view/943
Download Citation
Issue
Vol. 2 No. 54 (2020): Zaporizhzhia Historical Review
Section
History of Ukraine